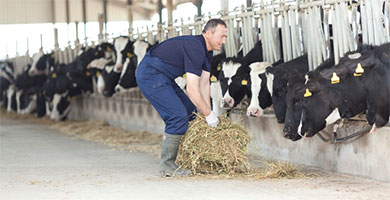 How the Dairy Industry and Dairy Farmers are Changing

HOW THE DAIRY INDUSTRY AND DAIRY FARMERS ARE CHANGING
GOING ONWARDS AND UPWARDS
Story by Helen McMenamin.

A "free market," is the ideal of most people in business, but it's not really possible for milk.

In Canada over 10,000 dairy farmers can only sell to one of three multinational processors. The farmers can't hold their product off the market and store it, taking it to a different processor is not often an option and they can't put production on hold.

In such a market the farmers have little bargaining power in selling, and can only boost their income by cutting production costs or increasing production. To compensate for this unfair market, some governments, including the US, pay regular subsidies to farmers. But the incentive to make more money by producing more milk remains. The market becomes oversupplied and big dairy farms fall into bankruptcy periodically. It's wasteful of resources, harmful to people and may imperil animal welfare.

Canada's supply management of milk uses a quota system, somewhat like a franchise fee. A farmer requires quota, available at provincial auctions, to ship milk to market and is paid a price agreed by them all that's based on cost of production, and butterfat and protein content. Quota currently costs around $35,000 for each cow's production. Farmers who ship more milk than their quota allows are not paid for it: the revenue from it is shared among all producers.

The quota system of supply management in Canada began in 1966 with the creation of the Canadian Dairy Commission. The system wasn't fully national until 1974 and it took some time and political effort to develop today's system.

To prevent Canadian production being undermined by imported, subsidized milk, import controls and, more recently, tariffs have been imposed. In contrast, US producers' revenues from milk are believed to have been below the cost of production for at least 10 years. Direct subsidies from taxpayers to dairy farmers have been made up to 73% of their returns - 35 cents a liter - an increase from 62% in 2010. Canadian dairy farmers receive no direct subsidies.

Some people who see a free market as the only good system claim there has been no innovation in Canada's dairy industry since 1970. The development of an effective, self-sustaining supply management system to replace the chaotic market and dubious quality of Canada's milk supply could be considered one significant innovation.

Canadian milk still comes mostly from family farms where people work hard together. But milk from each cow has increased considerably, to match the most productive in the world. It all meets the highest food safety and quality standards, and animal welfare is better than ever.

The predictable returns in supply management have enabled dairy farmers to invest in their businesses. A typical dairy farm is likely an investment of $15 million or more. It's most likely a family business, with more than one family member working in it and at least one who really loves the cows.

Our animal husbandry has to be top-notch," says Koostra. "These animals are athletes, giving us amazing performance in milk production. We have to give them the best of care."

That care includes a herd health visit with his vet every two weeks that he credits with helping him avoid emergency vet calls.

Fifty years ago, dairy cows were milked in barns where each was tied in a stall where she could stand or lie. Some were milked by hand but a growing number of farms had electric milking machines incorporating a sealed bucket that was carried between cows and the refrigerated bulk tank. Today most cows are milked in parlours where one person can milk and observe the health of the cows and keep udders and the area clean. Cows may graze between milkings, but many farms prefer to feed a total mixed ration carefully balanced for health and high milk production in a free stall barn.

Cows are free to walk around in wide alleys to allow mechanical cleaning, or to rest in stalls bedded with rubber mattresses, straw, shavings, or special sand that does not damage cows' hooves and can be recycled. Nutrition consultants are regular visitors, constantly adjusting feed ingredients to cow's needs.

Ventilation systems in barns are constantly improving, with bigger, slower-moving fans and automated curtain walls to protect the cows from heat or cold. Some farms allow cows to move in and out as they wish, but most often a majority of cows are inside.

Robotic milking systems are being widely adopted by dairy farmers. Cows learn to go to an automated stall that closes a gate when she enters. A sensor reads a transponder as she approaches a feed bowl and depending on her needs, dispenses the appropriate amount of concentrated feed. As she eats, her teats are washed, milk tested and a suction cup applied to each teat that sucks out her milk. After milking, each teat is dipped in a solution that closes the milk duct and the stall gate opens to allow the cow to leave.

Robotic systems allow cows to be milked when and as often as they like. Some, especially in heavy periods of their lactation like to be milked three or even four times a day. The system can recognize when a cow is entering the system just for the feed, and opens the exit gate without feeding a cow recently milked. It takes a herd a few months to adapt to the robot milkers, but farmers say they seem more content. If a cow's milk sample indicates a health problem, milk is diverted to a tank that is separate from the bulk tank of milk to be picked up by the processor's truck.

A robotic milking system can handle about 50 cows and costs around $250,000. The transponder each cow wears on a collar or anklet can monitor the cow's activity, temperature and gut health. Like the milking system, it sends alerts to the farmer's cell phone, so they know there may be an issue or the animal is ready for breeding.

Dairy farms rarely keep their own bulls. They rely on AI, using bulls constantly assessed for their relative merits, using their offspring's performance and genomic indications from their DNA. They may acquire sexed embryos for heifers, so they have smaller female calves that they can deliver more easily.

Environmental impact is one of six aspects of milk production the Canadian Dairy Farmers support in the industry: Milk quality, food safety, traceability of milk from farm to consumer, environment, animal welfare, biosecurity and social responsibility. The industry is supporting real assessments of their performance individually and as a whole.

Bonnie and John den Haan insisted their children not return to the farm until they'd worked in a career for at least four years. Their daughter, Marianne Edwards, taught in the Arctic, but then wanted to return to the Loretto, Ontario farm. She enjoys showing city people where their food is produced. She runs the on-farm dairy operation and store along with the family area where kids can milk a life-size mechanical cow, play on a ride-on tractor and enjoy other activities Marianne devises.

"It's a challenge, but I want to showcase agriculture," she says. "As farmers, we need to tell our story - it's not being told, people don't know where their food comes from."

The family developed their Sheldon Creek Dairy to accommodate the return of Marianne and her sister Emily who works with the cows. They pasteurize their own milk, but don't homogenize it, so it tastes different. They make flavoured milk and ice cream all summer with different flavours every month, including Irish cream, mango and egg-nog, as well as fruit smoothies. They also make kefir, yogurt, labneh - a Middle Eastern soft cheese, cream and gourmet butter and ghee. All are as fresh as possible and are unique tastes, so their customers are happy to pay a premium price.

A new development in their product line is A2 milk. Dairy cows produce one of two variants of a protein in milk, and one form can cause digestive upsets in some people. Den Haans found some of their cows produced the A2 version of the protein that seems to be easier for some people to digest. They tested the genetics of every one of their cows and programmed their new robotic milkers to direct milk to one of two bulk tanks. Their A2 milk, the first available in Canada, is being greeted enthusiastically by buyers.

Sheldon Creek Dairy products are sold through high-end grocery stores and coffee shops in and around Toronto, as well as in their farm store, where they also sell beef from their beef herd. Being less than an hour from Toronto, they have many visitors to their farm shop, most of whom spend 30 minutes or an hour at the farm - longer on one of their monthly open house days. It's something people really enjoy.

Even though up to 80% of their milk is sold through their own processing plant, den Haan milk is still sold through quota. It is tested, bought and sold back to the family just like any other dairy farm, but most of it does not leave the farm.

THE FUTURE OF DAIRY

Innovation and investments in such a wide range of directions show that dairy farmers are working hard to improve everything about their businesses and their industry. Some herds will grow. Some farmers will drop out. But, the unique nutrition and health benefits, taste and processing options of milk - as well as the high quality of Canadian milk - will likely repay these investments. Possibly there will be alternative options - maybe A2 milk, goat milk or some new products - but dairy farming seems likely to continue in Canada. W

Helen McMenamin is a freelance writer living in Lethbridge. Since coming to Canada for graduate studies, she has raised pigs, wheat and canola as well as writing and editing for several magazines and science journals. She is passionate about farming and the environment.