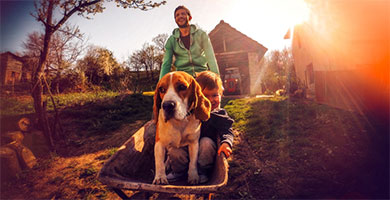 THE FAMILY FARM INC.
HOW CANADIAN FAMILY FARMS ARE ON TRACK TO SURVIVE AND THRIVE
Story by Richard A. Nichols.

In addition to playing a significant role in one of the country's leading economic drivers, family farms "are strong supporters of their local community economies - the small towns that we call the 'rurban' area," said Ben Graham, president of AdFarm, a major North American advertising agency that focuses strictly on agriculture marketing.

Graham noted that there is currently great excitement and opportunity in the ag sector. "Even though we're in a situation where markets and pricing are [uncertain], the long-term look for agriculture is very strong," he said. "There was an entire generation that was basically kicked off the farm because there was no future, but now young people are returning to operate those farms, so they can grow and thrive."

Don McCabe, a fifth-generation farmer from southwestern Ontario and Vice President of the Ontario Federation of Agriculture agrees... sort of. He and his brother want to ensure their land will be available for his nieces, should they choose to take up farming. That means their farm has to be run "according to sound business principles." In other words, it has to be profitable.

"I don't share the sentiment that industrial farming is a bad thing." McCabe said. "People always will be on the land - either farming it themselves, renting it, or working it for someone else. That doesn't change, whether you are farming 200 acres or 200,000."

In Ontario, land has become an investment of choice for those who want a low-risk way to earn more than bank interest. Renting land to an operator earns both an acceptable return and the security of knowing that if a tenant decides to vacate, there will always be somebody else willing to take it up.

McCabe says poor succession planning has taken its toll on the industry, but the past few years have seen the beginnings of a revival. "Young people are going back to farming because of high-tech innovations like precision ag," he said. "Who wouldn't want to be part of an industry that's being run like the space program?"

"The second and third circles of support for the operator are also attracting young, professionally-trained people," he added.

That's certainly the case with the Verwey family of Portage la Prairie, Manitoba, where Jill and Raymond Verwey, Ray's parents (John and Norma) and his brothers (Gerry, Roger and Conrad) grow seven sections of grain crops, milk 35 dairy cows, and raise 250 head of beef cattle. The Verwey farm is a corporation, in which all family members working the farm are shareholders. It's a structure designed to encourages the next generation to become part of the business.

Two of the four Verwey children have completed programs at the University of Manitoba: Rachel in animal science and Lindsay in agriculture. Each will return to the family farm after gaining experience elsewhere

"Rachel is an agronomist at the Co-op in the village of Notre Dame de Lourdes," Jill said. "Lindsay is currently milking 650 cows a day on a farm in New Zealand."

Family farms will become increasingly healthy over the next decade, according to AdFarm's Ben Graham. "In the recent past, the growth of family farms was hindered by a lack of access to labor. Over the next decade, that will change. Agriculture is becoming a very enticing industry, because of the technology it uses and the stability it provides." W

Richard A. Nichols (www.ansoncopy.com) is a farm writer from Okotoks, Alberta.