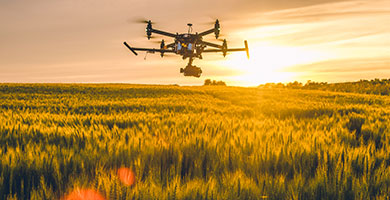 Know How to Use Drones for Agriculture

KNOW HOW TO USE DRONES FOR AGRICULTURE

Stopping in a couple of different locations in a canola field on his farm near Gwynne, east of Wetaskiwin, in central Alberta, for example, Carlson says he can launch the drone to "zip across a quarter section in a matter of minutes."

As the drone camera transmits images back to an app on his smart phone, he can see real time images of crop over the rest of the field. He can look for insect damage, weed patches, areas of poor performing crop, look at overall crop colour, and get a sense of crop maturity.

"The value for us so far is more about field specific verification," says Carlson who farms with family members including his son Brendon. "We know how the crop looks in the immediate area where we are standing, but how does it look over the rest of the field. Realistically I am probably not going to walk to the far side of every quarter or half section. However, we can launch the drone and have a really good look at the whole field."

Carlson who crops wheat, malt barley, canola, peas, faba beans and some times quinoa, figures the drone is complimentary to services provided by the farm's crop consultants, Farmer's Edge. As part of their agronomic services, Farmers Edge work with satellite imagery for the Carlson farm.

"Satellite imagery is very useful," says Carlson. "But, we're finding the drone allows us to look at the whole field, and also focus in on specific spots in real time, today. We know how the crop is looking where we are standing but it is nice to have the verification if the rest of the field is looking the same way. The drone can give us some idea of insect damage, or identify any cutworm patches, or just identify an area that looks different from the rest of the field. We might identify an area we will walk into to have a better look."

The Carlsons have been using a drone to better scout their fields since August 2019. Working with the Edmonton-based company, Landview, Brendon attended a drone school, which provided hands on experience in learning how to fly a drone, provided hands-on experience with various types and models of drones, and also helped students complete the federal certification process for drone owners and operators.

"You can also complete the certification online, but we liked the idea of the school because it provided hands-on experience and also covered the broader applications of how drones can be used in agriculture," says Carlson. "We're just at the starting point, but down the road this technology can be equipped with other scanners and other levels of artificial intelligence that will help with weed, disease and insect identification, for example. It will potentially be used to determine treatment thresholds and timing of crop protection products. There is much more to come."

Similarly, drones can play an ever-increasing role in livestock production as well. As Dr. John Church, with Thompson River University in Kelowna, B.C. is showing through his research, a drone is not just a tool that can help beef producers locate and track cattle on pasture. Drones equipped with various sensors can play an important role in livestock production and management.

In Saskatchewan, Brent Galambos says the agronomy team at his company Westgreen Crop Inspection, based in the Saskatoon area, all use drones to help them monitor crops over the growing season.

"The drones improve our efficiency and make it possible to check more of the crops in a shorter period of time," says Galambos, who is one of five full time agronomy team members. Two summer students also use drones to monitor crops.

"You walk into a field in three or four locations and the field may be a quarter section, a full section and in some cases even two full sections," he says. "You can check those spots where you're standing, but it is important to know how the rest of the field looks. That's where the drones come in. You can fly it out over the whole field, view the images on your smart phone and really get a good look at the whole crop."

Galambos says since they've been using drones for the past three seasons he's run into different scenarios. "I've seen sometimes the spots where I stop to check represent only about 20 per cent of what's happening in the field, and sometimes it represents 80 per cent. With the images and videos captured by the drone you can get a confirmation what is happening over the whole field."

Galambos says this is particularly useful when scouting fields for crop maturity, the presence of disease, and trying to determine fungicide timing. "These drones provide excellent visuals," he says. "Sometimes I'm just looking for color changes in a crop. Why is this patch different than the rest?"

Drones are also very useful for scouting for clubroot in canola. Westgreen has one summer student who specializes in scouting fields for clubroot. The disease causes premature ripening of the crop.

"With the drone we can identify patches where the crop may look dead or is drying out, that leads us to investigate those areas more closely," he says. "The drone images can alert you to any number of crop issues and once you see that then you can go to that area for ground truthing."

Markus Weber initially launched Landview five years ago to sell drones and related equipment, and then quickly saw a need for the school to familiarize farmers with drone technology, provide training in their operation, and explore some of current and future roles for the technology in crop and livestock production. Landview offers the only drone school in Canada specific to agricultural production.

"The first year we had 25 students and this past year we had 250 students," says Weber. "Farmers are interested. When we offer a school we are drawing farmers from within about an hour's drive of the location. And it's not just young farmers interested in this new technology. Probably the average age is 50 years and up. Farmers who come to the school aren't looking at this as a toy, they want to learn how it can benefit their time management, and help improve both crop and livestock production efficiency." Landview is planning to offer 20 different two-day drone schools across Western Canada in 2020.

Weber says the sky is the limit when it comes to cost of various drones and accessories. "But the reality is you don't need anything really fancy," says Weber. He says models in the $2,500 to $3,000 range have excellent quality cameras, that are simple to use, reliable and with the use of cell phone apps can provide an ever increasing amount of information. W

As a journalist for more than 40 years, Lee Hart has focused on reporting on and commenting about the Canadian agriculture industry for the past 30 years. A former field editor for Country Guide Magazine, he has been a writer and editor for Grainews for the past 15 years - based in Calgary, AB.