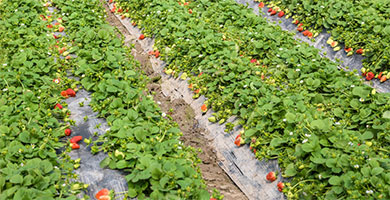 Cover crops - crops grown to be left in the field, possibly grazed by livestock - are a traditional tool of organic farmers. The right cover crop can be used to prevent erosion, help manage water, build soil organic matter and restore fertility. They can also fight weed, disease and insect issues, as well as helping wildlife and boosting biodiversity. But it is important to grow the right crop, seeded at the right density, at the right point in your rotation.

Plants grow soil. Soil is not just ground down rock to anchor plants and some decaying roots for earthworms to eat. Soil is teeming with life, most of it very small. These microorganisms feed on nutrients that plants make from CO2, water and the sun's energy. The plants leak some of those nutrients into the soil from their roots. Other microbes and slightly bigger creatures feed on those microbes and distribute the nutrients through the soil. Any time soil is warm and moist, its life goes on... but without living plants delivering fresh products of the sun's energy, soil resources are being diminished.

Plants leak products of photosynthesis from their roots into the soil, making a zone around them rich in food for soil microbes. Microbes build soil organic matter that holds and slowly releases moisture, and binds together soil particles so they aren't easily eroded by wind or raindrops.

Soil with just 1% organic matter could hold just a quarter inch of water in its top 6 inches. Increasing that to 5% boosts moisture capacity to a full inch. That's a big difference in potential crop growth.

Some plant exudates stimulate mycorrhizal fungus to grow right into the plant's roots to directly absorb nutrients and deliver plant nutrients, like phosphates. The association makes plants more resilient to stress and root disease. Other plants are invaded by rhizobia bacteria that transform nitrogen from the air into a form plants can use. In the shelter of plant roots, some are effective enough to provide for generations of plants in a few months.

Farming tends to bend the natural state of the land to our needs, tackling each difficulty with tools and technology. We used a stick to put the first seed in the round, then a hoe, now an air-drill or a vacuum planter. If we have a weed problem or an insect pest, we look for a simple solution. Growing numbers of people are seeing these often necessary, short-term answers as dealing with the symptom, rather addressing the real cause.

They're looking to nature for tools. In a natural environment, plants are growing, supporting soil life, and every day there's enough heat and moisture in the soil. A cover crop can feed soil life, without abandoning the modern tools we need to produce food for a hungry world. They may use soil moisture that's in short supply, but improved water infiltration can more than compensate for the loss. In balancing the cost of seeding cover crops against the long-term, these benefits can be more challenging.

Cover crops can lessen risks for main crops. Problem insects can do less harm when their favorite crop is mixed with other plants, so that their natural enemies have an advantage over them. The pest becomes food for a farmer's friends, their predators and parasitoids. In a competitive cover crop, tough weeds can be at a disadvantage.

Deep, heavy taproots like sunflowers or some brassicas break up compacted soils. They also scavenge for nutrients - including lime - that have leached beyond the reach of most crops, bringing them higher in the soil profile where crops can access them.

The right cover crop has to suit your rotations or location. "Ask a lot of questions of anybody offering cover crop seed mixtures and if you don't get knowledgeable answers, call somebody else," advises Grant Lastiwka at Alberta Agriculture, who has looked at many cover crops used for grazing and seen successes and failures. Complex cocktails can bring in diversity, so no pest is overly favored and most elements of the mix will do well in most situations - but be wary of mixtures that include any plant that could be a bridge to a disease issue for a crop in your rotation. The recommended rotation interval for peas and lentils is now six years because of root disease - not something you want to extend for a cover crop. A balance of carbon and nitrogen sources (think straw and protein for a cow) is best for microbe activity.

Cattlemen searching for lower cost ways to feed cattle have been leaders in cover crop use. Dependable electric fencing has enabled graziers to have animals harvest crops - often mixes of cereals - where they're grown. In areas with dry winters, the self-propelled, four-legged harvesters can graze swathed crops even through deep snow as long as there isn't a heavy ice crust. The animals spread their manure and urine on the fields. It's a less costly feeding system than delivering baled hay or silage to the animals. And since ruminant animals "waste" maybe 80 percent of their feed as manure, those nutrients are returned to the field where the crop was grown, boosting soil health.

Biodiversity and wildlife - birds especially - are in crisis. As well as helping future crops, reducing erosion and improving soil quality, a cover crop can support food webs we may not see, but are important to biodiversity and the wildlife we want and need.

One obvious link is between ground-nesting birds like waterfowl and grassland songbirds - some of our most endangered species - and overwintering crops like winter cereals. In spring, birds and their nests have safe cover undisturbed by machinery, and a better chance of raising their young successfully. W

Helen McMenamin is a freelance writer living in Lethbridge. Since coming to Canada for graduate studies, she has raised pigs, wheat and canola as well as writing and editing for several magazines and science journals. She is passionate about farming and the environment.