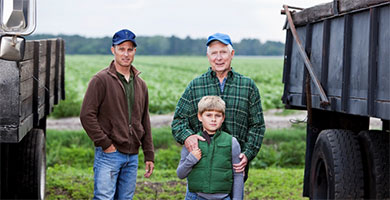 How the Family Farming Business is Changing

HOW THE FAMILY FARMING BUSINESS IS CHANGING
Story by Peg Strankman.

A few years ago the family farm future seemed bleak. However, these days, there are bright spots. Young people are coming back to the farm. Statistics Canada found the number of farmers under age 35 had increased slightly from 2011 to 2016, reaching almost 25,000. They saw a marked increase in the number of farms run by young women. Enrollment numbers in ag colleges are up.

Coming back to the farm are people like Kelisha Archer, and her sister, Kaitlyn. With their husbands Thomas Archer and Landon Hill, they are taking over from their parents and run a commercial grain and oil seed operation near Carbon, Alberta.

Archer always assumed the farm would be taken over by her brother. When he was happiest with his trucking company, she took a hard look at what she wanted and realized her heart had always been on the farm. "The farm was in my blood," says Archer, "My parents were very supportive about me coming back. It's been a challenge but it's where I want to be."

Keaton Dowdeswell, and his brother Riley, are in the process of taking over their family's farm near Pennant, Saskatchewan. Keaton left the farm for an oilpatch job, got tired of shift work and went back to school. But I realized that back on the farm was where I was happiest," says Dowdeswell.

Both Dowdeswell and Archer see young people coming back to the farm in their areas. Archer says a young woman who grew up just down the road has gone to Olds, and is now back farming with her parents, something that just didn't happen a few years ago.

Leo Quik has also come back to the family farming business, Quik Farms Ltd., based in Chilliwack, British Columbia (BC), working with his parents and two brothers, Andries and Corne. When the family business started growing in 2010 Quik came back to the intensive cut flower production.

Quik says the family has learned how to value what one generation has built and what the new generation brings to the table. Passions sometimes run deep but they stick together and work it through.

Dowdeswell sees the disconnect between the general public, where their food comes from and how it is grown, as being one of the big challenges facing agriculture. "We just started a farm website for our own business,' says Dowdeswell, "It's a great way to get the word out about what we are doing."

But are optimism and skills enough? Will Canadian family farms survive? What are the factors in play?

"Farmland has become a very valuable asset," says Ron Bonnett, president of the Canadian Federation of Agriculture (CFA). "Anyone that has invested in farmland has seen those assets go higher and higher. One of the things starting to happen is outside investors buying up farmland as an investment opportunity and then leasing it back to farmers."

"We have also seen foreign owners buying it strictly as an asset. That creates competition in the marketplace especially for a younger farmer wanting to get into the business. It creates issues about how you raise the appropriate capital. The other side is you might create opportunities. If there is an investment company buying up land, they might get into a long-term contract with a young farmer," says Bonnett.

The increasing price of farmland is a major factor challenging the ability of young farmers to get into the business. and threatens the viability of the family farm. This was identified by a recent Standing Senate Committee on Agriculture and Forestry study, A Growing Concern: How to Keep Farmland in the Hands of Canadian Farmers.

The first recommendation from the Committee report was that the Department of Finance Canada explore the possibility of increasing the amount of the lifetime capital gains exemption for qualified farm property to make it easier for new farmers to acquire farmland. "Increasing the capital gains tax exemption is the obvious one within federal jurisdiction, and of real importance to farmland owners in terms of passing on the farm," says Senator Diane Griffin, chair of the Standing Senate Committee on Agriculture and Forestry.

Bonnett supports the Senate Committee report recommendation that the capital gains exemption should be increased so retiring farmers were not paying so much tax, and could give young farmers coming in a bit of a break.

Another factor in the future of the family farm is the age of farm operators. The results of the 2016 Census of Agriculture show the average age of farm operators rose from 2011 and the number of farm operators declined. For the first time since 1991 the proportion of operators under 35 years of age went up slightly. However, only 1 in 12 operations reported having a formal succession plan in place to guide the transfer to the next generation of farmers.

Encouraging farmers to develop those succession plans has become a popular topic in the winter farm workshop circuit. Speakers emphasize that often it's almost impossible for the incoming generation to pay full value for the farm's assets.

Many farmers have borrowed against the rising value of their farmland. Statistics Canada identified that as being nearly 40 per cent per acre on average between 2011 and 2016. So many farmers wanting to retire need to sell their land for full market value.

The CFA has identified the leveling of the playing fields for farm families and the creation of a tax policy conducive to future generations of farm families as being one of the key actions to support the family farm. Bonnett poses a scenario where the retiring farmer doesn't have to sell the farm outright but could hold a mortgage and get a preferential treatment on the dollars earned from the mortgage payments.

An estimated 98 percent of Canadian farms are still family owned. About one-quarter of them are corporations, with shares held by family members. The number has grown rapidly, as accountants and banks recommend it as a risk management tool, providing tax advantages.

"Labour is a big challenge," says Quik. "The cost keeps skyrocketing and retention is an issue. Last year there was a dramatic wage increase and there will be another this year. Keeping the cost and supply of labour in line and keeping business profitable is a challenge, to be sure."

Statistics Canada's research shows the amount of Canadian farmland has remained relatively stable. Farms are bigger but still the vast majority are family owned. Farming continues to be a challenging business; staying competitive is tough. However, the optimism and enthusiasm of young farmers like Archer, Dowdeswell and Quik show that family farms are in good hands. W

Peg Strankman enjoys the challenge of using her communication skills to share agriculture's story to the general public and bringing consumer issues back to producers. Most recently she became an auditor for Where Food Comes From. Her passion for the agricultural landscape resulted in a Masters exploring a land performance framework as a basis for sustainability. She grew up on a cattle and grain farm north of Oyen and currently lives just outside Airdrie.