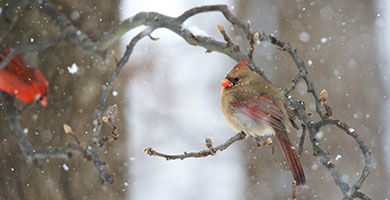 How to Attract Winter Birds

The first time I traveled to Algonquin Park in February, I was skeptical. What could I possibly see in the dead of winter beyond the usual Black-capped Chickadee, the ubiquitous Dark-eyed Junco, and the occasional White-breasted or Red-breasted Nuthatch? By the middle of winter, I craved nothing more than the arrival of spring, and with it, the excitement of greeting my favorite warblers. In fact, winter birding was the furthest thing from my radar.

Most birders in Ontario live for spring, especially since we have access to four out of five of the Great Lakes, which are important migratory stopover points for songbirds on their way north to breed. What could be more thrilling than witnessing phenomenal diversity of warblers stopping to refuel before continuing their journey northward? The sheer number of birds passing through Southern Ontario is nothing short of monumental and the frenzied pace often leaves the birder feeling that no matter where you are, there’s something more exciting happening right around the corner. 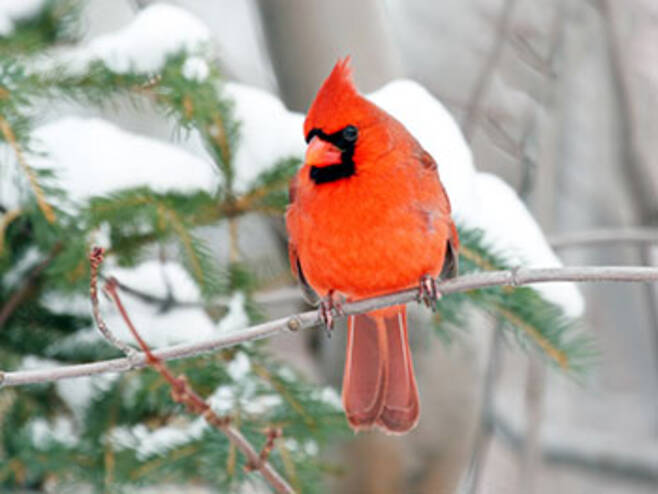 I arrived at the visitor centre in Algonquin Park, still unconvinced that the drive north from Toronto had been worth it. But before I had time to indulge in my doubts, I saw a flock of Evening Grosbeaks descend on the pine trees, with flashes of citrus yellow on their head, breast and under their tails, and white patches on their wings. The dreary, grayish winter landscape was transformed; the Evening Grosbeaks had covered it in holiday ornaments. Known as “Greedies” for their voracious appetite for sunflower seeds, these birds often pick fights at feeders.

And just like that, I discovered the marvels that are winter finches, and the unexpected excitement that is winter birding. It turned out that there is much more to birding in Ontario than May Madness. Not only are winter birds spectacularly stunning, but the pursuit of finding them feels much less daunting and frenetic than in the spring. For one thing, the birds stick around a lot longer; also, there are fewer species to recognize, which makes the enterprise feel more manageable.

Winter offers tremendous opportunities to see another kind of songbird that doesn’t need to migrate south for the season: abundantly colourful winter finches are more than happy to stay in Ontario all winter, where they have ample berries, cones and seeds to keep them well-fed. However, their populations fluctuate from year to year, depending on the abundance of food. Since 1999, Ontario ornithologist Ron Pittaway has been compiling an indispensable “winter finch forecast,” based on seed crops in the boreal forest, to help birders around the province know what sightings to expect.

Some of the most colourful birds are also regulars at bird feeders in the winter. The magic bird feeder ingredient for attracting these winter finches is black-oil sunflower seeds, beloved by Evening Grosbeaks, Red and White-winged Crossbills, Pine Siskins, and House and Purple Finches, in particular. Thistle seeds are favored by Common Redpolls with their red forehead patch and fetching pink neckties and Hoary Redpolls, which look similar but sport a paler complexion and a cuter, pointier bill. Plump Pine Grosbeaks look like they’ve been dipped in cranberry juice; these birds have a soft spot for crabapple fruit, in addition to sunflower seeds.

Another favourite winter songbird, and the only predatory songbird in North America, isthe Northern Shrike, otherwise known as the “butcher bird.” A mellifluous grayish songster with a gorgeous black mask and a ferocious hooked bill, shrikes delight in impaling their prey—usually rodents or other small birds—on thorns or barbed wire fences.

The pleasure of watching White-breasted and Red-breasted Nuthatches creep down trees headfirst with their necks extended as if they naturally inhabited a yogic posture never gets old. They’ll also happily come to feeders for the sunflower seeds and suet, which is equally appreciated by most species of woodpecker, including Hairy, Downy, Red-bellied, and Pileated.

Attracting winter birds in Ontario is an exciting enterprise. The exquisite Bohemian Waxwings, for example, are nomadic—just as their name suggests—and their appearance at feeders or in backyards is unpredictable at best. But we do know that they are berry aficionados, and the chances of seeing a flock of silky waxwings with rusty crests and glowing yellow and red waxy-tipped wing and tail feathers increases exponentially when we find ourselves anywhere near trees that retain fruit well into the winter months.

Another winter birding highlight is searching for elusive Snow Buntings in crop stubble. Finding them requires extreme patience and involves locating a whitish bird with black wingtips against a snowy backdrop. But the good news is that they travel in flocks and are extremely restless, which means that if you stand in their habitat for long enough, they will likely alight. The even better news is that they frequently socialize with an equally elusive compatriot, the Lapland Longspur, and encountering one means the other isn’t too far off.

Finally, the Grey Jay, which has recently reverted back to its original name, Canada Jay, is another common year-round bird in boreal forests. This fearless grayish bird with a gleaming white headlamp is often called whiskey jack, a name derived from Wisakedjak that means prankster or trickster. They will eat almost any kind of food, which makes hand-feeding them fairly easy. In a fiercely competitive race organized by the Royal Canadian Geographic Society, the Grey Jay recently beat such heavyweights as the Snowy Owl and the Common Loon to become National Bird of Canada.

I think back to my initial skepticism about a winter birding trip to Algonquin Park. The appearance of extravagantly coloured avian wonders not only offset the gloom of winter, but made it a birding season that I look forward to with no less excitement than spring. And should I ever tire of the fabulous finches, woodpeckers, and jays, there are always Snowy Owls to marvel at and extravagant waterfowl to regale the senses.

Julia Zarankin lives, writes, teaches, and watches birds with gusto in Toronto. Her writing has appeared in such publications as The Walrus, Ontario Nature, Threepenny Review, PRISM, and Maisonneuve.